“AMANDZEBA”, as the name implies, we are doing our best as children of the culture to pay our respects, “yƐ yƐ amandze mba”. Some might have probably caught onto the lead with regards to who is being honoured in this write-up. Your guess is probably right. He is one of Ghana’s musically illustrious and most celebrated acts. Nat King Cole Brew, affectionately known as Amandzeba Nat Brew is definitely one of the most successful musical acts Ghana has produced.
Being of a certain lingual orientation is somewhat considered a limitation in musical circles. Amandzeba however proved to the world why he was set apart from that statistic. He broke boundaries with his tri-lingual musical delivery.

The “Kpanlongo” hitmaker is named after American music legend, Nat King Cole. He is a native of Cape Coast but was born and raised in Accra. His love for music was noticed in his early years but coming from a family with very strict values, pursuing a musical path was almost impossible. It was school that gave Amandzeba the opportunity to exhibit the reach of his musical prowess. He partook in music competitions at school which were very common at the time. Most of the hit songs he’s recorded are songs he recalls writing whiles still in high school since he was forbidden to follow that path at home.

At an early age, he was forced to leave home because his dream career wasn’t in sync with that of his father who would rather see his son pursue a white collar job than become one who plays instruments and sings for a living. He met his friend Oliver Garshon who taught him to play the acoustic guitar. This gave him the push he needed to work on his demo.

NAKOREX, one of Ghana’s finest highlife groups back then was born after he was advised by Sammy Odo to join forces with a band. This impacted positively. “Kpanlogo YƐ DƐ”, a song on the group’s first album became an instant hit.

Amandzeba has been a blessing and a very important asset to highlife and the music industry as a whole. Even though the delivery of his music is distinct and culturally tailored he is recognized in certain parts of Africa and the world over.

One might say Amandzeba is a social activist. He has a unique way of coining banters, opinions and taunts into lyrics, his way of sharing his opinion on social and political issues but still shows eloquence in delivering his music. He also combines them with his in-depth knowledge of African history and melody.

He has three albums to his credit and has performed with other Ace Ghanaian musicians, Akosua Agyapong and Rex Omar of NAKOREX fame. He also has hit songs like “Wogbe”, “Biako” and “Baawo” which were all released in the same year.

The inimitable nature of his craft has won him deservedly, numerous awards. The ultimate prize at the 7th International Alpine Festival held in Saas Fee, Switzerland was awarded to Amandzeba Nat Brew. He keeps flying the Ghanaian flag overseas, showing the world the level of talent we possess.

Generations to come shall remember Amandzeba as one of Ghana’s musical ancestors.

Supa Gaeta and Ayat Team Up To Create Terminator

The Contemporary 'By The… 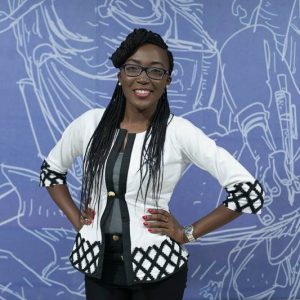 The Contemporary 'By The Fireside' -The Keni Kodjo Meet Up

Adomaa Features Jayso on 'What…

Adomaa Features Jayso on 'What Lovers Do'