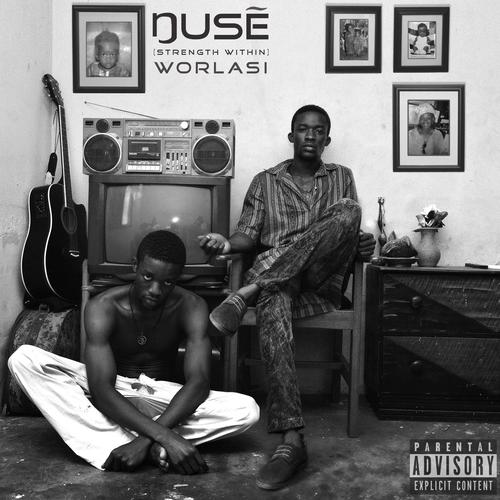 With a captivating album art, Worlasi’s Nuse stylized as ŋusẽ: STRENGTH WITHIN is a must-listen.

From the album art, we unveil the whole concept of the album. It is an exceptionally strong one which tells us how the choice of being one’s own slave or master is solely subjective. “A depiction of the same image as master and leashed (slave) has more of a deeper meaning than meets the eye; we are the perpetrators of the restrictions that limit us. These restrictions are as a result of our train of thought and the unbreakable mental barriers set up in our minds. As the popular saying goes, “no one can make you feel inferior without your consent” therefore you are a slave to your own self before you can be a slave to someone else hence the need to break down our barriers.

Qube, 6strings, Nkyinkyim and Maxi were the co-producers. Worlasi did most of the production by himself. The rhythm to the album isn’t one we hear regularly, it comes with a different feel. It captures the listener’s imagination and attention from start to finish ensuring there’s never a dull moment. Worlasi is exceptionally creative, a non-conformist. The mixes were ‘on point’; the voices clear, quality-wise, with audible ad-libs. With a mix of various instruments giving it an African feel, the album doesn’t identify with a particular culture or the Ghanaian culture per se, but our total identity as Africans. He also does a lot by capturing his identity as an Ewe (a tribe in Ghana) with sweet vibes of his native tongue on most of the tracks. Properly mixed and mastered up to standard, his delivery was articulate. The tracks were sung in pidgin, a few Ghanaian languages and English.

The intro, produced by himself is a spoken word performed by Selassie- an amazing young act- was epic. It serves us with deep content of our identity as humans and how distracted we are by poverty and other setbacks that we allow to serve as stumbling blocks. “Every time you wait, your ability goes to waste“, these words and many more statements make it an inspirational piece, one I’d recommend be listened to every morning before going about daily duties.

Although the individual songs play on the main theme- finding strength within to break our own barriers and emancipate ourselves from mental slavery- they are presented in a captivating way, distinct in the delivery of concept and individually unique. While some of the tracks are there to motivate and encourage us on the ever-disappointing nature of life, others just tell the truth bluntly and gets us to move for change. Easily a favorite, TOO NAUGHTY ft Maxi which was self-produced gets one to appreciate life and the chameleon nature of humans. The short pauses during play in the track were impressive. It allows for a moment of deep reflection on the words spoken.

Poetra Asantewa was the best feature on the album. Her delivery was breathtaking. She had a strong idea of the concept of the song and her rhyme schemes were on point. She came in strong, was smooth on the beat, and was very audible. She owned her part and maintained the strength all through the song making her verse enjoyable. On some of the songs, however, Worlasi could have shown more potential thereby doing away with features even though they made their presence known on the songs.

In some religions, being human is a sign of victory because of the presence of a supposed opposing force in position due to the lack of a body and an actual mortal existence. The concept of NUSE is spiritual but doesn’t conform to such a stand. The album is an affirmation to the fact that being human is simply not enough to warrant a feeling of victory. It conveys the message of having a sense of purpose, and encourages us to reach beyond our limits, ignoring negative energy and just simply pushing. It is very affective because it gets one to ponder and rethink certain stands as humans and promotes having a sense of self-worth.

With the fire burning within him, Worlasi is yet to be dumbfounded by his own successes given the amount of effort he puts in especially now that his style of music is being embraced by the masses. He must, however, be commended for his train of features considering the artists are not of the mainstream. This is a depiction of the level of originality that he represents. NUSE is a musical masterpiece so, if permitted, may we borrow a few lines from WAKE ORP, a self-motivating track in which he acknowledges Wanlov and M3nsa of FOKN Bois fame and BBNZ frontman, E.L, as the artists that inspired his art form, “YOU DID IT WORLA, WORLA DID IT“!

“You are the books you read, the films you watch, the music you listen to, the people you meet, the dreams you have, the conversations you engage in. You are what you take from these. You are the sound of the ocean, the breath of fresh air, the brightest light and the darkest corner. You are a collective of every experience you have had in your life. You are every single day. So drown yourself in a sea of knowledge and existence. Let the words run through your veins and let the colors fill your mind“- Anonymous.

Worlasi reminded us of this truth in NUSE. May we ever strain at the leash to escape our comfort zones and reach the deepest. May life’s journey never get you weary! NUSE!