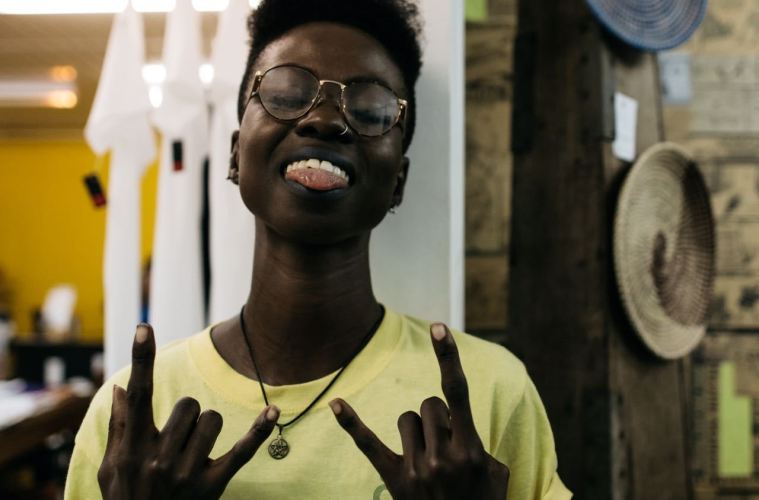 Unorthodox Reviews caught up with new recording artiste Tinuke, a Ghana-based Nigerian rapper. We had a little chit-chat, and this is what ensued…Enjoy!

1. Who is Tinuke and what makes her different from other artistes?

Well to keep it short and simple, Tinuke is an artist in different forms and a lover of good music. My versatility coupled with my creative fashion style makes me stand out from the others.

2. Which genre of music is your stronghold? And which genres have you experimented with?

Hip-hop, Rap, and RnB are my strongholds. But I’ve experimented with Afro-pop, house music, and grime.

Sarkodie, E.L and Joey B. Not influences…more of admiration. Sarkodie is my favorite African rapper. His flow and lyrical content are impeccable. He has come a long way. He really worked hard for himself. He believed and I respect him for that.

I like E.L because of his compilations, hitting us with back to back mixtapes and albums. He’s also very versatile. He can sing a song from start to finish and totally kill it! He’s not just a rapper.

Same as Joey, he’s a rapper who can kill a chorus or even sing throughout. I also admire his urban fashion style.

5. How do you define the genre hiplife? How different is it from hip hop? And why do you think hip hop has still not peaked in Ghana?

Hiplife is very different. I would say Hiplife is a combination of GH pop and rap. I think it took a while for the masses to relate to hip hop. But in recent times, they have started to adapt more and accept that hip hop is here to stay. I would actually say hip hop has peaked in Ghana.

6. Do you take offense when people put you in a box as just a rapper and not a musician?

So far I haven’t encountered people putting me in a box. But one thing is for sure when people see me, they assume I’m a singer. *laughs* Either that or, they realize that I’m capable of different styles and genres. Those have been the two scenarios I’ve encountered

7. How does it feel being a female in a male-dominated genre (rap/hip hop)?

It feels amazing! *laughs* I have an upper hand because I’m a rarity and that makes me able to catch people’s attention easier. People become more interested and impressed when something fresh and unique is presented.

8. You mentioned a creative fashion style…can you describe your fashion sense?

Very alternative and urban and…errr punk because of all my piercings…*laughs* at the same time sporty and Afrocentric. I can’t really put it all in one or two words, but my style is just spontaneous! I put together random outfits sometimes, as long as it feels jiggy!

9. What do you feel is the most pertinent issue in our society? What in your opinion is a rapper’s role for being a force for societal change?

Well, I’m no politician but in my opinion, the greatest issue here in Ghana and Africa, in general, is corruption. As a result, we don’t get to benefit from the society to the fullest potential. A lot of our rights are also being infringed upon.

But I think rap music or any form of art for the matter can serve as a kind of escape from reality. Or seeing the reality in a hopeful way, as opposed to being sad and depressed about it. As cliché as this sounds, I genuinely believe that music can inspire people. Because it influences listeners a lot, especially with social media these days.

10. What project are you currently working on?

I currently have a song out called “Waakye”. It has a vibe-ish Afro-pop sound. It’s on YouTube, Soundcloud, and on downloadable portals like urbanroll. I’m about to release my debut compilation, a mixtape called “H.E.R Mixtape“, H.E.R stands for: Having Extreme Rage. Aside from that, I’m currently working on a number of collaborations, but those will be out much later.