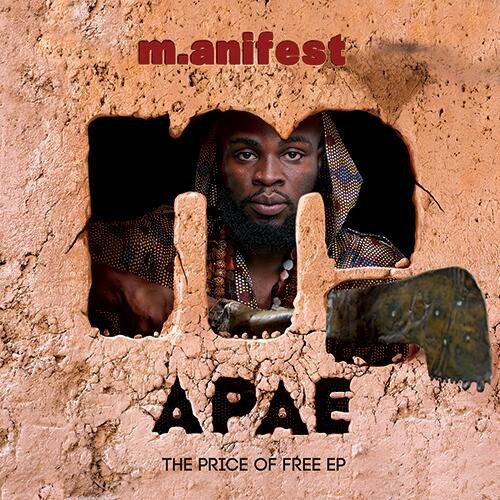 In anticipation of “Nowhere Cool“, we decided to have an Unorthodox Review of M.anifest’s most recent compilation release, “Apae: The Price of a Free EP”. Enjoy!

Now a center of critical acclaim, M.anifest was largely underrated until quite recently. He made his berth on the mainstream scene with his 2011 album release “Immigrant Chronicles” which almost instantly positioned him as one to watch, with certain notable singles such as “Asa”, “Over and Under“, and “Makaa Makaa“. “Immigrant Chronicles” thus marked his transition from an independent Minnesota based rapper to a mainstream Ghanaian artiste.

It was however his third studio album, “Apae: The Price of a Free EP” released in 2013 which marked the completion of this transition, cementing his stature as a true Ghanaian hip hop heavyweight. “Apae” is an 11 track album with features from the likes of Blackway, Paapa and legendary hiplife pioneer Obrafour. Production credits on the album go to Yung Fly, G-Mo and Jayso.

“Driving in the storm how I fit see ahead, weather forecast a bit nippy ahead, beggars can’t choose but be picky instead, 9-5 blues kick me I’m dead.“

“Somewaybi“ samples the song “Merua” from “Umalali Garifuna“, a Caribbean women’s musical project and was produced by budding Ghanaian producer Yung Fly. The listener is serenaded by the lushness and authenticity of this rich African sample over which M.anifest glides seamlessly to point out a number of societal imperfections and illogical occurrences in the typical Ghanaian life, and the need to keep things light and have fun regardless.

M.anifest made it a point to whet our auditory appetites, giving us a foretaste of what to expect from “Apae” with “Ebei“, which was the first single to be released off the project. Ghanaian super producer Jayso was the one behind the boards on this one. M.anifest raps over a thumping beat delivering a motivational message of rising above adversaries and proving critics and dream killers wrong.

On “Debi Debi” M.anifest assumes the role of a social commentator – a role he has become well known for over the years. The hook which is sung in Twi and pidgin English translates “one day one day it will be well, but when will this one day come.” The wordsmith addresses everything wrong with our society on this record. From corruption, the issue fraudulent “men of God”, the state of our educational system, our regressive mentality as Ghanaians to the deplorable state of the creative arts industry.

“Mind games give migraines what I for do, in this war of roses nobody wins its true.”

On “Mind Games” M.anifest is reflective over his lover’s attitude. He raps about how his lover keeps driving him crazy with mind games, and how he is being taken for granted when he is supposed to be the best she’s ever had. “Mind Games” was produced by G-Mo with M.anifest’s long-time collaborator Jayso also lending additional vocals on the piece.

“Never Feel” is a personal favourite and one for the true hip hop heads. This joint was produced by G-Mo and features promising rapper Blackway, son of ace Ghanaian comedian Kwaku Sintim Misa. If you love M.anifest’s singles “Keep Shining” and “GodMc“, which in my opinion are different chapters of the same book, then this is a must listen!

“No Shortcut To Heaven” undoubtedly has all the makings of a classic! An epic beat produced by G-Mo, a legendary collaboration with hiplife veteran Obrafour, coupled with M.anifest himself lyrically in the rarest of forms. This is another conscious tune where M.anifest tells the story of the contemporary African youth, the struggle to make earns meet, and the craze for materialism and the fast-life. A beautifully written piece indeed and arguably the most commercially successful tune on the album.

Other songs on the project include “Singitdamnit“, “Right Here“, “Big Sixes” and “Post Azonto Blues“. Although M.anifest’s previous works have always been heavy on Ghanaian influences and references, “Apae” is more of a home grail than the others. Twi skits he fused into the close of quite a number of the songs did not only serve as a comic relief, but also gave context, making the project even more relatable to the Ghanaian audience. M.anifest himself describes “Apae” as his first album to be completely made in, inspired, and provoked by Ghana.