Gafacci delivers a minimal club-oriented compilation with exciting collaborations along the way and sets the tone for the year 2020.

This release draws back to the artist’s signature sound his listeners have become accustomed to before his last project, “Tash BNM” which was ranging more below 127 BPM.

Without losing the attention to detail, Gafacci enriches his latest project with Ghanaian rhythms and his unique style of making less seem more, which is not the only thing that needs to be highlighted on this EP.

“Face The Wall” = Trying at all costs not to back up against the wall. Therefore, just face it! – Any challenge. You may learn a new trick.

Trotro basically means change/penny/coin etc. A word commonly attributed to commercial buses in Ghana due to the affordability within the country and other parts of Africa. If you’ve ever been to Ghana’s capital, it is one of the remarkable things you can’t get out of your mind. Especially the frequent car honks and the loud voices of Trotro conductors, shouting “Accra” or “Cirq Cirq” may mutate into music through your ears after a while. The music is inspired by the strong connection between Trotro and survival in the day to day life of the majority of people living in Ghana.

Chale means buddy or friend. It is the best ‘ice’ breaker in the streets of Accra. This track features fellow Ghanaian renowned MC and frequent collaborator Bryte. His vocals are smartly placed and match the percussive production infused by traditional national rhythms at every drop. If you ever have a chance to hear this song live, do not miss out! Bryte always leaves a crowd with a smile on the dance floor and drops nothing less than feel-good anthems. “Chale” is a potential club banger.

The mind is a powerful thing. It has the power to block your abilities as well as enable you to do things you never imagine you could do. One of the things Gafacci empowers with this sound is “Dancing”. He creatively pictures the little voices in our heads on this song. Kaala is slang in Ga language meaning, Do not try or dare. The dark voice in this track embodies the spiritless urge to dance on a dance floor. The other voice empowers one to be a champion. It pays to listen to the voice which makes you feel like a champion.

This instructional dance song with elements of Azonto, features Kasoa based Afrobeats and Dancehall genius Jakhal and the Ghanaian Grammy 2020 nominee GuiltyBeatz. Jakhal dropped an energetic hook on this very unique minimal afro-dance beat cooked by the two spearheading producers/DJs for electronic dance music in Africa.

The coordinate (5.561252, -0.160653) on the artwork displays on google map a wall of a popular Senior Secondary school in Labadi. Rotate 180 degrees, you will find a yellow wooden structured building, which is the former home of Gafacci. Where he lived and learned how to make music, from there he moved on to produce music that continuously impacts club culture in Ghana and the rest of the World. Gafacci’s gratitude is to his fan who rescued and saved him throughout the tough times. The “Face The Wall” EP cover is a message to himself and anyone who relates to his story, a reminder that anyone can survive through any situation if they focus on things that matter. For Gafacci, THAT THING will always be his art for his fans. 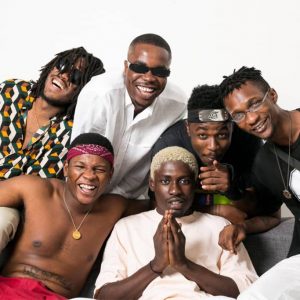