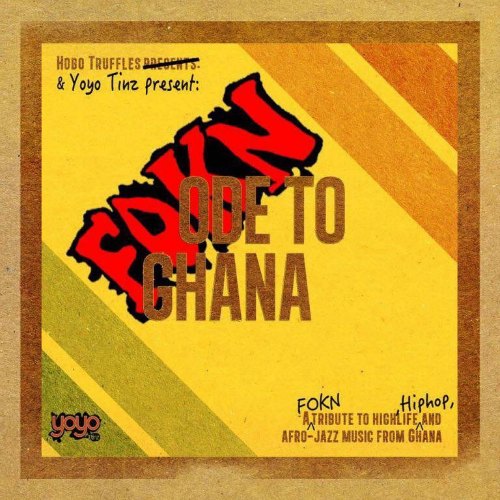 The “Foes of Kwame Nkrumah” as they like to call themselves, popularly known as the FOKN Bois, are back at it again!

The rather controversial duo is  known for using their music to express their thoughts and opinions on social, political and, most often than not, general issues. Over the years, they’ve succeeded in sending their messages across in a very controversial yet entertaining and catchy way, always drawing the attention of music lovers to their new releases. The duo since the release of the sequel to their pidgin musical- the first pidgin musical in the world- Coz Ov Moni 2 (The FOKN Revenge) in 2014, had not released any major project till the 2nd of July 2016 when they released a  21-track mixtape titled FOKN ODE TO GHANA.

FOKN ODE to Ghana is literally a Mixtape in the sense that it’s contents are random and vary from trending social issues, to political issues among others which are mostly the subject for discussion on most social media platforms. The production of this tape was handled by several seasoned producers and the duo themselves. It’s a very entertaining yet educative project. It portrays the musical potential that FOKN Bois possess and it’s different from the secular and regular Ghanaian industry music that most Ghanaians are used to.

With a mix of their english and pidgin style of rap, the FOKN duo enters with Arrival. After a proverb is said by an anonymous speaker in Ga, a local Ghanaian dialect, they briefly rhyme over a smooth beat talking about everyday activities that occur in Ghana to quickly give an overview of the content of the mixtape. Robot X Shuffle worked on production for this tune. This song’s production was tight. The producer does a lot with the instruments and it gives it a really cool vibe. It’s a danceable tune but it still captures the attention of the listener to the content of the song.

The “Award-winning Gospel Porn duo” come back to rap about the current situation in Ghana and express their opinions in the process. “Things no dey be, but we dey pretend say we dey live the high life“, this is the hook to the song-  Live The Highlife produced by GHprodu. Legalization of marijuana, hygiene, corruption, power crisis and water shortage in Ghana are some of the issues that were addressed on this song. I gathered from listening that the theme behind this song is simply the issue of pretense among the general Ghanaian public, i.e. acting like all is well amidst all the turmoil the country is in. The rhymes are carefully schemed and the choice of beat is also smooth and pleasurable to listen to. The delivery on this song makes it interesting to listen to and has an African feel. It’s a head nodder and comes with a “handkerchief-waving” vibe.

One of my personal favorites on this project so far comes third on the tracklist. Cleverly put together, Mugu Yaro talks about “politricks” and some of the “politrickal” (That’s definitely coined) parties involved in spreading lies and making empty promises to the Ghanaian populace. The lyrics at the beginning of this song seem a bit directed at two political parties and a flag bearer of one in Ghana. FOKN bois are telling them to cease playing with Ghanaian minds as though they were games, we hear that on the hook “Mario sonic you dey play games, chess dummy you dey play games, tetris candy crush still dey play games hide and seek four corners shun dey play games“. Mugu is here explained as a foreigner who falls for lies and trickery on the internet by scammers and fraudsters and Yaro as a master of Deception, hence a perfect title based on the concept of the song. Mugu Yaro was produced by Ja-Kova. This song has everything a good song needs. It also contains an element of laughter due to the content, kind of lyrics and delivery and it shows how much mastery FOKN Bois have made of their craft.

Fifth on the tracklist is Sons of Sun, an advocatory song against skin bleaching, in light of recent cases of ascendancy in the use of skin bleach products  which led to a campaign against the act on social media not long ago. On this track we hear the voice of Ghanaian boxer, Braimah Kamoko, popularly known as Bukom Banku in an interview concerning his decision to “lighten up” (bleach). M3nsa, a member of the duo mentions some of the side effects of bleaching whiles rhyming on the song “Helen is smelling, ah! No one is telling her” and indirectly advices cosmetic dealers to desist from marketing skin bleach products. This song produced by Ben Bada Boom is educative and entertaining at the same time and is definitely an asset to any Anti Bleaching campaign. I like the fact that this song isn’t medical in nature but addresses the fact that there are repercussions of bleaching in an entertaining way, makes it easy to address the issue and creates awareness.

“Plant more trees”, “Close down all churches”, “We go recyle”, “more farming, ban GMO’s” and “Support drama groups and drama troupes“. These are obviously some of the suggestions for development heard on this track titled One For Aniki produced by Shuffle Jack. On this tune, FOKN bois share their opinions on what they think will get Ghana up on its feet and bring development. I had always thought FOKN Bois were some “I don’t cares” who are just enjoying life and making music, but they did address things that weren’t being done that could contribute to a better Ghana in a more rhythmic manner. It’s an interesting song.

Africaspirit produced by Melodiesinfonie and Talking Drum which is also produced by Robot Orchestra are similar in concept but delivered and tackled from different angles. On both tracks FOKN Bois urge listeners to be proud of being African and to embrace that in its entirety. They mention symbols of African culture which were deemed unfit and socially unacceptable by white supremacist which are now being used for tourist attraction in foreign lands for the observational pleasure of all people and only serving as nothing but emblems of historical relevance. On Talking drum they also stressed on Africans losing their sense of Africanism and urged the ushering of the African people into an age of Africanization to avoid “selling our rights” as Africans and originators of our own culture. As “FOKN Routine” requires, the FOKN bois took the opportunity to take shots at Ghanaian act Desmond Blackmore- secularly known as D-Black– who, in their opinion, has weak lyricism, as well as other artistes. This is actually a great tune because of the advocacy for Africanism. The beat switches up at a point and it has a soulful pattern but gives a groovy feel. It’s a jam with beautiful instrumentals and has gone through professional production and mixing. Find out more as you take a listen to the whole mixtape.

FOKN ODE TO GHANA is a preparatory project to ready the minds and hearts of listeners for the release of the second sequel to their pidgin muscical- Coz Ov Moni. This mixtape, though controversial and entertaining, serves as a platform for the advocacy of change not only on minor social issues but change on a larger scale, pertaining to the state of mind and behavior of the Ghanaian and African people on a larger scale. It shows the depth of the effort being put in by these acts and the standard of creativity that FOKN Bois invest in their music. 21 insightful, educative, controversial and entertaining tracks are waiting to be put on blast in your speakers. Forget about your data, this tape is everything worthy of being called “Worthy”. FOKN ODE TO GHANA is a conceptual musical masterpiece and is a must-listen!