Get to know all about Cina Soul, a young Ghanaian singer-songwriter ready to make great strides in the Ghanaian music industry.

A year ago, Kwaku Sintim-Misa, a popular Ghanaian satirist, advised the new generation to take-up their lives and future and mold them into the shape of their dreams. While offering an apology on behalf of the older generation for taking critical matters for granted, raising their posterity to be dependent and also not rendering enough support or encouragement for the new generation, he asked that the youth fight with all their might and talent to break the status quo. A lot has changed particularly in the aftermath of this thought-provoking chain of statements. A feisty breed of young Ghanaians has chosen to break the status quo. A feisty breed of young Ghanaian talents has broken the status quo.

Among this swarm of talents is an amazing young woman whose vocal abilities is comparable to none. She sings with passion and focus and turns every single word in every single line of her pieces into a roll of joy to tickle one’s hearing senses to be at her beck-and-call. One rarely loses attention while listening to her. The Ghanaian populace became acquainted with her music after she participated in the Vodafone Icons remix edition reality show in 2014. After thirteen weeks of stiff competition she emerged as one of the top 5 finalists.

Christie Quincyna Quarcoopome, popularly known in showbiz circles as Cina Soul, has won the heart of many music lovers. She has done a number of covers and mash-ups. She has a cover of Asa‘s famous “Bamidele“, and a mash-up of Bankulize and Skintight by Mr. Eazi, In My Bed, and Go Harder by Stonebwoy. These covers were produced by liquidbeats and Kayso respectively.

Cina Soul fuses her beautiful Ga dialect into her music to couple it with a more indigenous and original feel. Two of my favorite Cina Soul tracks are “Awo“, also produced by Kayso, a song that talks about a loved one leaving without saying a word, and the popular “Julor“, released a month ago. “Julor”, literally means “thief” in Ghanaian Ga dialect. In this song she speaks on stealing the heart of a loved one. It was beautifully done with Ghanaian rapper, M.anifest and produced by Odunsi.

Visit her account on Soundcloud, just be cautious-she’s full of soul and her voice might sting yours to life. I hope she steals your heart!

10 Of The Best Ghanaian… 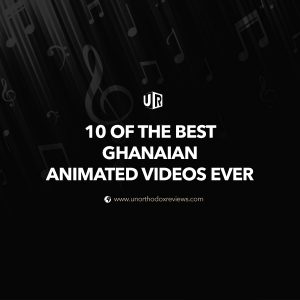