Every week, we highlight the very best of Ghanaian music for your listening pleasure. Check out our selection of the best new Ghanaian songs you need to hear featuring music from Mugeez (R2bees), MzVee, Sista Afia, Bosom P-Yung, Strongman, Mr Drew, and more.

In the same week he make a guest appearance on Ghanaian diva Mzvee’s afrobeat jam dubbed “Biggest Boss”, Mugeez joins forces with international ensemble of Iakopo and Drei Ros on dancehall infused pop banger “Closer To You” which also features the legendary Sean Paul. Listen to the star-studded banger below:

Mr Drew undoubtedly has one of the biggest songs on the airwaves at the moment with “Dw3” which features Highly Spiritual label mate Krymi and rap heavyweight Sarkodie. The burgeoning act seeks to replicate the success of the aforementioned track with newly released “Eat” featuring Stonebwoy. The innuendo-laden jam was produced by a tag-team of Kwekubillz and DaBeatGod, with the video directed by Coby Melody Twum.

Mzvee has been on a roll ever since returning from her long hiatus. This time around she taps Extrial Music boss, and lead vocalist of legendary hiplife duo R2bees, Mugeez, for this afrobeat jam titled “Baddest Boss”. The track was produced by Nigerian producer Saszy Afroshi, with the music video directed by ace South African director Justin Campos.

Having stirred a lyrical warfare over the past couple of weeks, Sista Afia looks to make a return to her speciality which is dropping bangers! Her newly released cut titled “Street” features promising dancehall act Akiyana. The song was produced by Forzy Beats, with video directed by Prince Dovlo.

Yung D3mz-produced “Kolo” is undoubtedly the biggest song off Skillz8figure’s well-received debut project “Gangsta Luv”. Directed by J-Wills the video is predominantly shot in an ambient mercurial neon lit setting and sights Skillz8figure and his beautiful muse as the centre of attraction. The video also spots cut-away party scenes of a young group sharing a good time with one another.

Being in the middle of a lyrical warfare for several weeks now, rap goddess Eno’s latest drop is speculated to be to rebuttal to Medikal’s earlier released “Nonesense”. This speculation is given credence by the fact that she enlists two of Medikal’s nemesis: Strongman and Sister Deborah on the record. The catchy jam was produced by Hypelyrix with the visuals directed by Rakil Ghana.

Viral music sensation Bosom P-Yung looks to keep up the buzz he’s garnered over the period with newly released “Hold Me Tight”. Produced by Ipappi, “Hold Me Tight” is a rather pleasant deviation from the trap-heavy records he is renowned for.

Strongman delivers bouncy hiphop cut titled “Big Boy”. Produced by usual collaborator Tubhani Muzik, this record seeks to pave the way towards the release of his forthcoming “10 AM” album. The track spots simplistic visuals shot and directed by KobbyShots.

Taken of his recently released “The Truth” EP, Kofi Jamar showcases his versatility on this highlife love duet “Kyer3 Me” featuring S3fa of Black Avenue Muzik. The smooth low tone tune was produced by Trino, with the visuals directed by Prince Dovlo.

Rapper M3dal follows relative hit single “Pay” remix up with hip-hop cut “Pull Up” featuring usual collaborator Amakye The Rapper. The boom-bap styled rap cut was produced by Senyo Cue and is quite a deviation from the popular mainstream sound of previously released “Pay” remix which features Kwesi Arthur, Sitso and Fameye. 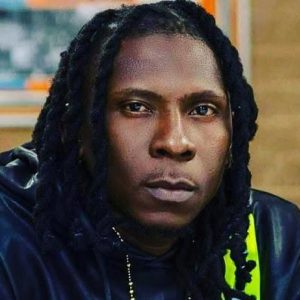